“Some people are meant to fall in love with each other, but not meant to be together.” ~ Scott Neustadter

Seven years and (almost) seven months is a long time to know somebody and yet, fall short of truly understanding them. Have you ever really wanted to love somebody and not known how?

Sometimes that’s all it takes for a friendship to start. A curious 20 year old and an equally curious (and impatient) 14 year old. Maybe I shouldn’t have responded, maybe it’s best thing I ever did.

He was this nice bad boy. Never was he too eager to share his story or blow his own trumpet nor was he the kind to make you uncomfortable with unwanted questions. I still wonder what led him to randomly text me. Was it just another random friend request of sorts or just another flirtatious move? That sunny April afternoon was the first of my 2757 days of him.

We chatted (texts and calls) through the summer, with every-minute texts and all-night calls till the winter. With very little from his end and never-ending stories from mine, there was never a moment of silence really. Today it seems tough, but going back in time – calling him post dinner and hanging up while getting ready for school – I’d do that all over again. That 20 year old scrawny boy in his yellow t-shirt, was it.

Until that awkward moment *cough* – our first chat in ‘person’. I still remember being really edgy about the whole thing. It wasn’t a date but just a random walk (for the first time). We’d spoken enough for a lifetime but when it came to finally meeting him I wasn’t sure what to say. We’d talked about movies, common interests, books, music, people, heart breaks, each other, life and yet I managed to fall short of what to say to him. And so just like any other awkward moment, it went as planned, it was weird. We fought! My shyness + my ridiculous conversation + awkward silence + his ego + his girlfriend = Disaster.

Sometimes that’s all it takes for a friendship to rekindle. A reserved 25 year old and an excited (and impatient) 19 year old. Maybe I shouldn’t have responded, maybe it’s best thing I ever did.

We connected again in 2012. He was his usual guarded self and I was dating someone by then. Months went by, my relationship started falling apart and he was there to listen to my rants about heartbreak and insensitive boys. He was there through college crushes and final farewells and proms. He listened patiently, sometimes more than what he bargained for. Before I knew it, we were back to 2007. We were back to the every-minute texts and long calls. I cried, mostly and he was my favourite girlfriend. My go-to bud who said the right things at the right time – ’cause that’s how well he knew me.

And then we met again. My shyness + his shyness + mostly silent conversations + light humour + no girlfriend + no boyfriend + subtle flirtation = Win.

Summer of 2013
I had my first butterflies and dragons.
We had our first rain.
We had our special moments.
I found him.

I took him into my life and loved him with all of my heart.

We enjoyed every moment we got to spend with each other, and all the things we did together. We weren’t just friends anymore. We respected each others space, it gave way to our pace. We looked at things in a different light and appreciated each others opinions. After those first few days, I wanted to spend more time with him and so did he. We would do movies, dinners, parties, rides, silent walks and still not have enough of each other. Fifteen days apart, fifteen days together – international calling and constant texting. Over that one month, I had grown to appreciate him a lot more than before. I had some of my best times with him and I wanted more.

He was very different from me. His silent nature complimented my talkative nature. Our differences brought us closer to each other than draw us apart. We would explore each others’ likings. He made me my favourite caramel custard (fondest days) while I stayed up some nights to watch his favourite team play. He watched the sunset with me and stepped out into the rain. I beat him in his drinking A game and ate his favourite food. Being different was actually a perk because of how much fun it used to be.

All of a sudden, it just got comfortable. I would make plans and he wouldn’t. I would be over expressive while he was more closed and needed his own space. From the boy who first texted me and talked to me for hours, he started getting more annoyed than excited. Our different natures were more uncomfortable and frustrating than reassuring. Is that what too much of each other does to you? I kept hoping he would  surprise me someday and show up in the city or simply break out of his usual guard like he used to. But suddenly it just felt like he wasn’t as excited to be with me any more. He felt no initiative unless urged towards a plan. He just wanted to be. And while I know he wanted it as much as I did, it was still easier for him to sideline it rather than prioritise us over his work schedule or social evenings. It began to feel like one of us was more explicit about our feelings while the other expected unspoken words to be understood. One of us was hot while the other was lukewarm. We were still in love but at two different extremes of the bargain. 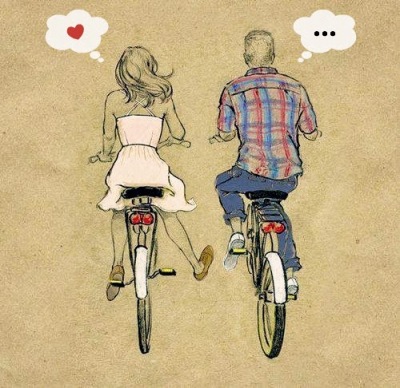 He is lost, he’s unaware. Affection used to mean being vocal but today, he’s more silent than ever. He’s distant and unsure. Were we meant to fall in love with each other, but not meant to be together?